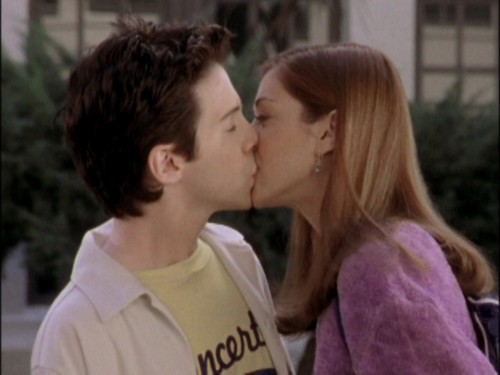 This Oz-centric episode firmly establishes him as part of the Scooby gang. I love how he’s still his typical contemplative self, even when faced with the fact that he’s a werewolf. And I think it’s hilarious that he became one because his little cousin bit his finger.

Giles:  Meaning the accepted legend that werewolves only prowl during a full moon might be erroneous.
Cordelia:  Or it could be a crock.
Xander:  Unless the werewolf was using last year’s almanac.
Buffy:  Looks like Giles has some schooling to do.
Giles:  (gets excited) Yes, I must admit I am intrigued. Werewolves, it’s… it’s one of the classics. I’m sure my books and I are in for a fascinating afternoon. (leaves)
Buffy:  He needs to get a pet.

Having werewolves change for three nights instead of one puts a unique twist on the myth, and was probably very helpful to the writers. Willow’s comment about it at the end of the episode was fun, too, in the midst of this sweet exchange:

Oz:  I spoke to Giles. He said I’ll be okay. I just have to lock myself up around the full moon. Only he used more words than that. And a globe.
Willow:  I’m sorry about how all this ended up. With me shooting you and all.
Oz:  It’s okay. I’m sorry I almost ate you.
Willow:  It’s okay. I kind of thought you would have told me.
Oz:  I didn’t know what to say. I mean, it’s not everyday you find out you’re a werewolf. That’s fairly freaksome. It may take a couple days getting used to.
Willow:  Yeah. It’s a complication.
Oz:  So… Maybe it’d be best if I just… sorta…
Willow:  What?
Oz:  Well, you know, like, stayed out of your way for awhile.
Willow:  I don’t know. I’m kind of okay with you being in my way.
Oz:  You mean, you’d still…
Willow:  Well, I like you. You’re nice and you’re funny. And you don’t smoke. Yeah, okay, werewolf, but that’s not all the time. I mean, three days out of the month I’m not much fun to be around either.
Oz:  You are quite the human.
Willow:  So, I’d still if you’d still.
Oz:  I’d still. I’d very still.

By the way, I love Willow and Cordelia connecting over their frustration with guys. And Xander’s reaction to them hanging out. Poor Xander, having to deal with the girl he used to love, the girl who used to be in love with him, and the girl he used to hate but now is starting to like. Which makes this a great lead-in episode for “Bewitched, Bothered and Bewildered.”

Giles:  It acts on-on pure instinct. No conscience, predatory and aggressive.
Buffy:  In other words, your typical male.
Xander:  On behalf of my gender, hey.
Giles:  Yes, let’s not jump to any conclusions.
Buffy:  I didn’t jump. I took a tiny step, and there conclusions were.

I also love all the references to season one in this episode. We have Oz noticing that the cheerleading statue’s eyes follow him, from “Witch.” Xander mentions being possessed by a hyena, a reference to “The Pack,” though he flubs up with keeping up the appearance of memory loss. And both “Teacher’s Pet” and “I Robot, You Jane” are mentioned here:

Xander:  Buffy, you can’t blame yourself for every death that happens in Sunnydale. If it weren’t for you people’d be lined up five deep waitin’ to get themselves buried. Willow would be Robbie the Robot’s love slave, I wouldn’t even have a head, (looks at the coffin) and Theresa’s a vampire.

After Theresa hurried away from an approaching werewolf only to run into Angelus, I felt kind of sad. For half a second I’d thought, “Great, she’ll be okay now,” and then I remembered. Angel isn’t Angel anymore.

Which brings to mind another thought. If vampires rise the night after they’re turned, why are so many of them already buried? Yes, there have been a few episodes, like this one, where they rise in the morgue or at a funeral home, but it seems the majority of them in Sunnydale claw out of graves. And those graves usually already have inscribed headstones. Maybe things are different in California, but I live next to a cemetery and it takes weeks or longer for new graves to get a marker, and they’re usually the flat ones that are flush to the ground. But I guess the show thought recreating the iconic image of a vampire rising out of the dirt backed by a headstone was more important than being strictly realistic for the few people who would mind.

The werewolf hunter, Kane, going after Oz seems to foreshadow when the Initiative goes after him in season four. It also brings to light the whole monsters vs. monsters debate that will play a major role in several future episodes, both in Buffy the Vampire Slayer and Angel (especially “That Old Gang of Mine”). And things just get murkier as you delve deeper into the Buffyverse. (Hmm, now I’m imagining someone writing a thesis on Buffy and the death penalty.) Where would you draw the line on creatures Buffy should slay versus those she shouldn’t?