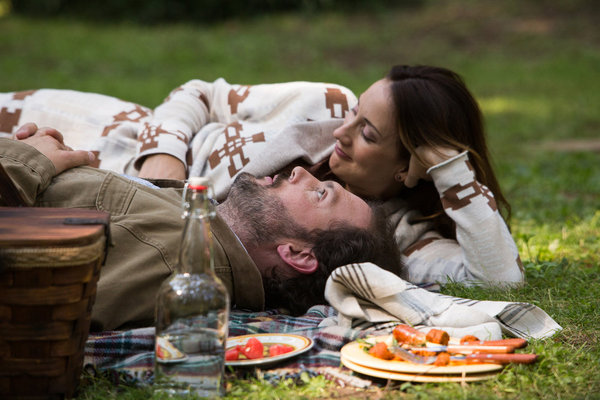 Grimm kicked it up a notch with this episode – it’s right up there with many of the best episodes of the show, while (hopefully) establishing a status quo for what the rest of the season will be like. And yes, it looks like there’s a Scooby Gang forming.

This episode also removed the voiceover from the new intro, which made it a hundred times better. I’m still not a big fan of the music, but without cheesy words it’s decent (plus the clips are already edited to match the music, so it would have been an extra expense to redo them to match new music).

The bad guy in “Quill” (a misnomer of a title, despite the introduction of a porcupine-like Wesen) isn’t a Wesen or even a human. It’s a disease – a plague that spreads from pigs to Wesen, causing them to go from amorous to feverish to attacking people like crazy in a few hours.

Hank’s talk with Nick clarifies a few things – including how Nick doesn’t even know how Wesen can tell he’s a Grimm (the show has been a bit inconsistent with how that works – but if he’s been wondering, why doesn’t he just ask Monroe?). He also tells Hank about the books, but not about the weapons and the trailer. It was fun watching Nick grimace at some of Hank’s comments around others with his new knowledge, but all in all, Hank seems to be adjusting pretty well to the new world he finds himself in.

Juliette still can’t remember Nick, but at least she’s proactive with trying to put the pieces together. She seems particularly interested in how she and Nick were getting along – understandable, since emotional or physical trauma from an abusive partner would be one reason for blocked memories of him. She remembers Bud (the Eisbiber repairman) talking about Nick, so she visits him. Bud mentions that Nick is a Grimm, then hilariously tries to cover it up by creating a random definition when he realizes she has no idea what a Grimm is.

After Adalind’s cat claws its way out of its carrier, hangs creepily upside down on the ceiling, and finally runs out of the shop, Monroe invites Rosalee on a picnic. Their flirty banter after the meal is interrupted by a plague-infected Wesen named Ryan Gilko attacking them. Following their escape, Rosalee begins to show symptoms of the disease and Monroe realizes she was scratched by one of Gilko’s quills. She barely has time to point Monroe toward the remedy before collapsing.

Meanwhile, Captain Renard has received information from a contact in France that another assassin is on the way to Portland to get the key from Nick. This time, it’s a horse-like Nuckelavee. Renard tries to trace him through flight data but loses him in Portland. The Nuckelavee follows Nick around but does not approach him.

Nick and Hank bring Gilko to the apothecary shop for treatment and find Monroe working on the remedy:

Monroe: Hey, hey, hey! That’s the guy we saw at the park! He came right at me, Nick! Listen, Rosalee’s got it too. I think he must’ve scratched her, or something.
Nick: Wait, Rosalee’s sick?
Hank: Rosalee’s one?
Nick: Yeah, she’s a…she’s a Fuchsbau.
Hank: Then Monroe’s one?
Monroe: Yeah! Blutbad, here. Can we get into this later? I mean welcome aboard, Hank. Glad we don’t have to beat around the bush anymore. It’s just, Rosalee’s in the other room, okay? And I’m just about to mix this stuff.

The disease causes Rosalee to go crazy as well, and she crashes through a window, runs into an alley, and attacks Nick with a pair of scissors before he’s able to subdue her. The remedy works fairly quickly, and soon both Gilko and Rosalee are recovering.

With Nick, Monroe, Rosalee, and Hank all working together now, they are really starting to give the show a sort of Scooby gang Buffy-like feel (especially since Rosalee’s apothecary shop is reminiscent of a cramped Magic Box). Even Hank’s addition reminds me of Oz joining the group. (Or if we want to look at the group Angel-style – especially since they’re all adults, not teenagers – we have Angel, Cordelia, Wesley, and now Gunn.) Though I miss the constant Nick/Monroe partnership of season 1, I’m glad the group is expanding. I’m curious to know how long they’ll keep Juliette and Sgt. Wu in the dark.