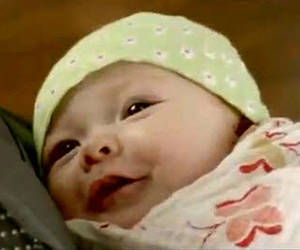 Super-cute video preview of the next episode of Bones! Six weeks after giving birth (even though that episode aired just a week ago), Brennan tries to rationalize leaving little Christine at the Jeffersonion’s day care, while Booth assures her everything will be fine. Little Stapes isn’t much help as she gives her parents adorable facial expressions. Could they have picked a cuter baby to play the role?