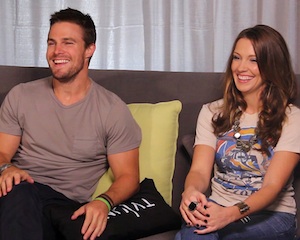 And the Comic-Con interviews keep coming in! Here we get a chat with Arrow’s two main actors, Stephen Amell (who plays Oliver Queen, the Green Arrow himself) and Katie Cassidy (who plays Oliver’s ex-girlfriend and the daughter of the police chief who’s after the vigilante Arrow).

I haven’t really seen these actors in anything (brief guest spots on New Girl for both of them is pretty much it), so my main takeaway from from this interview is that they both seem extremely likeable. This show seems to be hitting all the right notes – if they’ve gotten the actors right (aside from Susanna Thompson, they’re new to me so it’s hard to tell), all it needs is good dialogue and great plots.

Side note: the whole Katie and Stephen thing threw me off at first, since my brother’s name is Stephen and mine is Katie (both spelled exactly the same way too!).