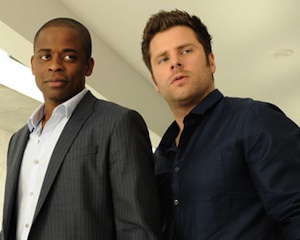 Fun video interview with James Roday, Dule Hill, and Psych series creator Steve Franks! They were tight-lipped about Henry’s fate, but offered a huge list of guest stars for the Clue-themed 100th episode. They also mentioned they weren’t able to get one actor for season 6, hence the delay, but they were also not able to get said person for season 7 either (my guess – they were hoping to stage a Tim Curry reappearance).

The trio also mentioned that the musical episode has been expanded to a two-hour movie event that will air on a different day than normal episodes, and will feature all-original songs. (The musical episodes I enjoyed the most – from Buffy the Vampire Slayer to Community’s latest – tend to use original songs, so this is a plus in my book.)

Also, the rumor about a proposal appears to be true – I wonder if the show will pull a fast one on us, though, and have Lassie pop the question to his lady-love instead of Shawn doing so.

Video at the link below:

What are you looking forward to about season 7 of Psych?

One thought on “Psych to Stage Musical Episode — Season 7 – TVLine”