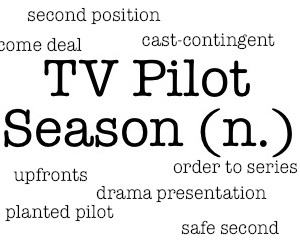 Wow, TV Line has outdone themselves with this comprehensive list of ordered pilots for next season. Even though these pilots mean that other shows will be canceled, it’s fun to imagine and predict what next season will look like on the various networks.

The article starts with definitions of the various terms surrounding pilot season. The ones that most intrigue me are planted pilots and second position. Second position was responsible for the cast change on New Girl – when actors of bubble shows film pilots, but if their current show is renewed, the new show has to recast the role.

Planted pilots introduce a new show within the world of a current show. The article sites The Finder episode on Bones last season, but many shows do this, though the new show doesn’t always get picked up (for example, when Jess left Gilmore Girls, the episode where he meets his California family was supposed to become a spinoff show). Today’s most-watched scripted drama, NCIS, had a planted pilot on JAG, and in turn hosted a planted pilot for NCIS: Los Angeles.

I plan to write another article going into more detail about the networks’ various pilots, but one thing did sadden me about this list: no Joss Whedon projects.

View my thoughts on the CW pilots and cancellations!