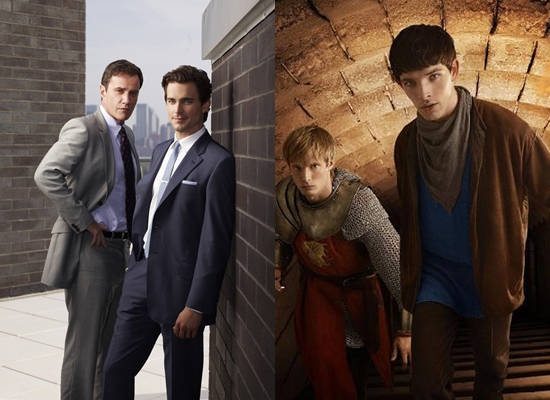 In our second quarterfinals match, we have two duos who won against very tough competitors in their previous matches to make it into this round. Peter and Neal of White Collar (who’ve defeated Gibbs & Abby of NCIS, Angela & Hodgins of Bones, and Castle & Beckett in previous rounds) face Merlin and Arthur (who’ve previously defeated Nikita & Michael, Andy & Barney of The Andy Griffith Show, and Supernatural’s Dean & Sam – the latter by only 30 votes out 3000 cast!). Which duo gets your vote this round?

Our next-to-last matchup from round three (House & Wilson vs. Lucy & Ethel) just finished – be sure to check out the results and all our current matchups here! The winning duos will advance to the next round. (P.S. Be sure to stop by our new show poll as well!)

You can find a full list of upcoming TV duos matchups here (edited to show most of our round three eliminations!). Round four matchups are in purple. Each of the round four matchups will be open for 72 hours (3 days), so spread the word quickly so your favorite pair will make it into the next round! Fans have used Twitter, Facebook, Tumblr, forums, Reddit, blogs, and chatboxes to get the word out about past polls. Our toolbar at the bottom of the page has lots of quick links to help you share this post, or you can mouse over the image above!

Which is your favorite TV duo? Round 4.2