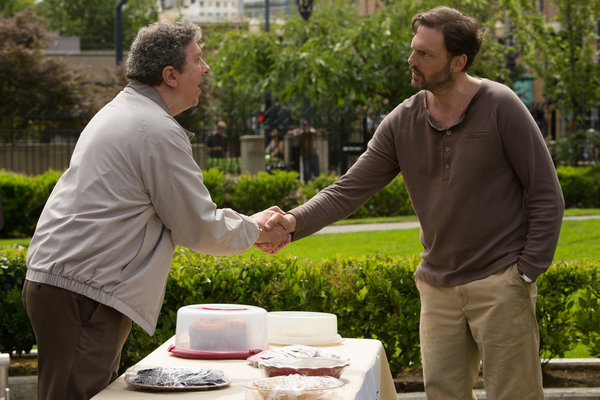 Grimm returns with a more widely-known tale – the story of the wolf in sheep’s clothing. A Blutbad is pastor to a flock of Seelengut (sheep-like Wesen), and Monroe goes undercover to solve a murder.

An embezzling case is brought to Nick and Hank (why was it brought to them in the first place – aren’t they homicide detectives?), but when the suspected embezzler turns up dead, it becomes a murder investigation. In one of Grimm’s more gruesome deaths (though they didn’t show much), the victim was throw alive into a wood chipper, and was only identified by his metal hip replacement.

When it’s discovered that the pastor’s former church also had someone steal money and then disappear, the Blutbad reverend (Jonathan Scarfe, Perception) becomes the prime suspect. The church’s secretary (Kristina Anapau, True Blood) also comes under suspicion as she was married to the first church’s alleged thief.

While the murder mystery in this episode wasn’t all that difficult to figure out, the highlight was Monroe’s undercover operation, and the congregation’s reaction to him. (Like at a church bake sale, when he says, “You’re making me hungry” and they act like he’s about to eat them.)

Meanwhile, the Nuckelavee assassin is still stalking Nick. The way the last episode ended, I expected it to crash through the ceiling and attack, but no, this assassin is far more patient. After searching Nick’s house for the key (and almost getting caught by Juliette), he makes it farther than any enemy Wesen has before – the trailer. He attacks Nick there, but when the fight makes its way inside, Nick is able to grab a weapon and kill the assassin. He finds the picture of the key on the Nuckelavee.

Renard got the identity of the assassin from his contact in Europe, so he’s in the know when the body washes up on shore. He also has a flashback to kissing Juliette – it’s about time we get back to the lingering results of the pure-of-heart potion, isn’t it?

Speaking of Juliette, Nick freaks out a little when he comes home and she’s not there, but she’s just out with friends and hadn’t thought to let him know. That leads to a talk between the two of them, complete with a few awkward grins. It’s so cute, Juliette starting to have crush on the man she doesn’t remember.

Earlier, Nick had a drink with Bud, the Eisbiber repairman, and he confesses how he accidentally let it slip that Nick was a Grimm.

Hank is getting a lot more comfortable with the whole Wesen thing – and it’s making interviews with suspects a lot easier, having him in the know.

We see more of Nick adding his own notes and sketches to the info passed down to him.

I didn’t notice it last episode, but the new intro has more things different than just the voiceover removal. Most notably – the showing of Renard’s Hexenbiest side.

I like how the secretary took the “other woman” in her lover’s life to the tropical resort to enjoy the ill-gotten gains – showing that she realized how they’d both been deceived. Sad that the rest of the church didn’t get their money back, but they got their revenge another way.

One thought on “Grimm – The Good Shepherd”