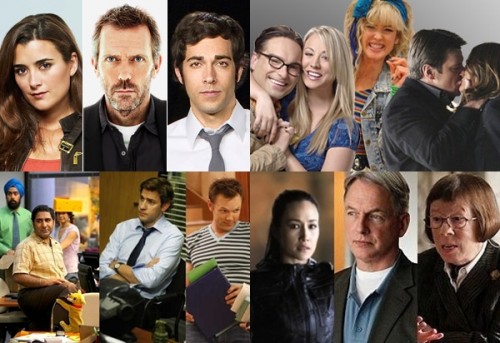 Wow – tons of shows are getting renewed or cancelled this week, and many are airing season finales. I keep checking for news and getting a rush of joy or sadness, and sometimes both. This year I dived headfirst into many new shows, and quite a few of them got cancelled.

Before this year, only two shows I watched as they aired had been cancelled with only one season – Fox’s 2009 summer medical drama, Mental (I had only started watching it at the urging of my sister) and another summer show, NBC’s excellent modern retelling of the story of David, Kings. (I watched the best-known one-season show, Firefly, years after it was off the air.) I picked up 3 new shows in 2009-2010 regular season: Community, NCIS: Los Angeles, and V – all got a second season. Even the two new shows I started watching in summer 2010, Covert Affairs and Rizzoli & Isles, will be back this summer.

This year I watched 6 new shows: The Cape, Detroit 1-8-7, Blue Bloods, No Ordinary Family, Outsourced, and Nikita. As of this moment, four have been cancelled, and the other two haven’t been renewed yet.

A quick recap of the verdicts on this season’s shows, by network:

They kept Castle, one of my favorite shows, but cancelled the three other shows I watch on the channel – Detroit 1-8-7, No Ordinary Family, and V. Of the three, I was most surprised by V’s cancellation. The show was intriguing, with an excellent cast, and the short seasons helped keep the integrated storylines comprehensive. I started watching it for the sole reason that it starred Morena Baccarin, aka Inara from Firefly (Alan Tudyk, aka Wash, was also in a few episodes). With this season’s finale ending the life of one of the most annoying characters on the show, I had high hopes for season 3. Too bad.

They seem to be waiting to see what the other networks do, as they haven’t revealed many verdicts. But I’m confident they’ll bring back the two not-yet-renewed shows I watch on the channel: Blue Bloods and NCIS: Los Angeles. NCIS, How I Met Your Mother, and The Big Bang Theory have already been renewed.

I’m only current with one show on the channel, House, and its renewal is hardly a surprise (it will likely be the final season, however). I’m glad they renewed Bones (on season two now and loving it!) and Fringe (hoping to try it soon), though.

I was shocked to find out less than a day after watching the season finale of Outsourced that they’d cancelled the show. I was really looking forward to season two. The Cape was dead as soon as they shortened the episode count from 13 to 10, but I plan to get Bear McCreary’s soundtrack to the show. The other Firefly alumni show, Chuck, has been picked up for a 13-episode final season (I love Chuck, but as more and more of the show’s characters move toward domestic bliss, I can see why they’re deciding to end it.) And of course, Community and The Office got renewed. Community’s finale does raise the question of whether they’ll bring back one of the main characters for season 3. And does the show have a 4 season limit due to the college setting?

I only watch one show on the channel, Nikita, and there’s no word yet on whether it’s been picked up for season two. I really hope so. My lineup needs more shows that focus on the overarching story instead of individual episodes, and the last few episodes of Nikita really kicked things up a notch.

In conclusion: Networks really seem to be abandoning rookie shows this year. I hope that space goes to other high-quality scripted shows and not endless rehashed versions of reality and competition shows.

And my other wish for the 2011-2012 season – don’t air The Big Bang Theory and Community in the same time slot!