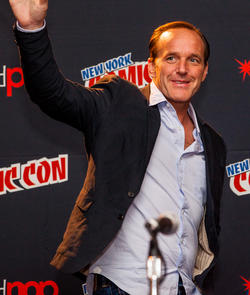 In a universe where a superhero can survive 70 years in ice and Nick Fury has already lied about one circumstance surrounding a “death,” it can’t come as too much of a surprise that Agent Phil Coulson might still be alive and kicking. With the news out of the New York Comic Con stating that Clark Gregg has joined Marvel’s S.H.I.E.L.D., the beloved character is decidedly not dead. While it’s still possible the show might take place before The Avengers or Coulson would only appear in flashbacks, my theory is that Nick Fury faked Coulson’s death not only to bring the Avengers together, but to launch a new secret division of S.H.I.E.L.D. that Coulson will manage (given that the council wanted to nuke NYC, it makes sense that Fury would want a group of agents they know nothing about).

As much as I hate the idea that a key emotional moment in The Avengers was a fake out, bringing in Coulson will do wonders for the Marvel show. No one is better suited to tie the show in with the movies than Coulson. Fury is too much the larger-than-life boss, and Hill is too new to the franchise. Looking forward to where S.H.I.E.L.D. will go from here!