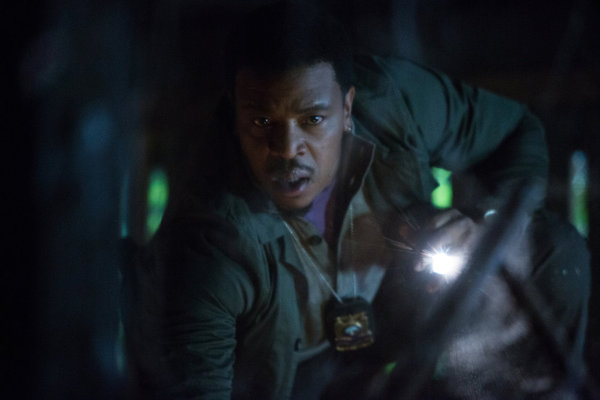 In this Hank-centric episode, we get a glimpse of Nick’s partner as a young cop, arresting a murderer with a crazy story. Now that Hank knows about Wesen, he’s starting to think the story might not be so crazy, and he and Nick have only 36 hours to find the truth before the man is executed.

This episode puts a Grimm twist on the Native American legend of the Wendigo. As Nick and Hank try to find any evidence to stay the execution, they find a sketch Craig Ferren drew and match it to journal entries on the cannibalistic Wesen. The creatures bury the remains of past meals near their homes, but the house where the two Wendigo brothers attacked Craig is now a mini-mart. They search out where the surviving brother lives and find a pile of rotting bones and flesh hidden underneath it. The Wendigo returns home and attacks them, but Hank is able to get the upper hand and shoot him. The execution is stopped just in time.

In the meantime, Renard and Juliette are still struggling against their feelings. Juliette is also trying to figure out why Nick and only Nick was removed from her memories. Nick tells her it’s because of the cat scratch and asks her what she remembers about the night she went into a coma. She remembers crying in the rain and going to Monroe’s, but nothing about Nick’s confession. He says if he tells her now, it won’t make any sense. She’s angry with him for making decisions for her, while he is frustrated at sleeping on the couch every night while his personal life is stuck in limbo.

Renard finally calls Juliette and explains that he knows someone who can help them through this obsession, if she’s willing to try. She agrees, and he makes an appointment with Monroe at the shop. They show up at the shop the next day, but can’t keep from kissing each other – just in time for Monroe to come out and see them.

This episode perfectly sets up next week’s midseason finale, but it’s also full of awesome moments on its own. One of my favorites was the creepiness of Nick walking through the prison and seeing so many inmates woge.