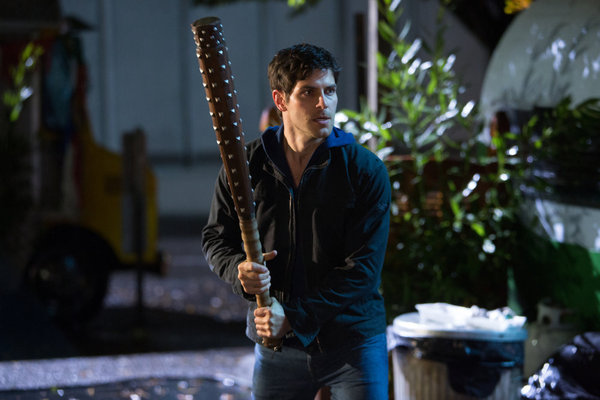 Text on screen right before credits: “To Be Continued . . . Sorry.”

Those four little words completely sum up my frustration with this episode of Grimm. This was the midseason finale. Everything was building to a climax. Characters were dancing around each other trying to keep secrets. And the writers kept up the dance right up until the end, where they gave us one minor reveal before fading to black.

At least they apologized about their meanness.

The big end-of-episode reveal was Nick finding out that Renard is the dude Juliette’s been kissing. Considering that Juliette herself almost told Nick who it was early on in the episode, it didn’t seem too much of a payoff for an entire episode of secrets. Nick doesn’t know Renard’s a Royal, half-Hexenbiest, that he ordered the attempts on Aunt Marie’s life, that he’s working against other Royals, that he brought Juliette out of the coma at great personal cost, or that he and Juliette are obsessed with each other because of a spell.

I feel like Monroe should have told Nick that the obsession was likely because of a spell, though of course Monroe leans toward assuming Renard has only a crush. And Nick did learn that the Royal in Portland had Aunt Marie killed – if he chooses to believe Adalind.

Yes, Adalind is back, and so annoying smug I wanted to smack her at least once a minute while she was on screen. She’s in town for one purpose (besides revenge) – to get the key for Sean’s brother, Eric, and she doesn’t mind pitting Renard and Nick against each other to do so. She has her Verrat enforcers (one of whom looked weirdly similar to Wesen ex-cop from “La Llorona”) help her threaten Sean, and later beat up Hank to get him out of the picture. With Juliette she takes a different tack – going out for coffee to try to wheedle information out of her. She’s very effective at this, finding out that Aunt Marie had a trailer full of strange stuff that’s sitting in a storage lot (why wasn’t Juliette more suspicious of her odd questions?), and passing that info onto Renard after she lets herself get arrested (so he won’t simply have her killed). The final scene of the episode has Renard standing outside the trailer.

But back to the first scene of the episode – Monroe catching Sean and Juliette kissing at the spice shop. Juliette bolts right after spotting him, and so we don’t even get to see an attempt at a cure. Both Monroe and Juliette give Nick “we need to talk” calls, but Nick stops at his buddy’s on the way home, so he gets Monroe’s side of the story first. Interestingly, after Nick leaves home to spend the night in the trailer, it’s Juliette who shows up at Monroe’s door, more confused than ever about her feelings but needing the comfort of a friendly face. She also questions him about why she was at his house right before the coma, but he avoids answering directly and says that Nick thought she might have been poisoned.

When Renard calls Nick into his office partway through the episode, I was really hoping he’d purposely woge and show Nick his Hexenbiest side, and they could work together against Adalind. Why is he still keeping Nick in the dark? Of course there are still the Aunt Marie/Juliette issues, but Nick would have probably taken Renard’s word over Adalind’s about Aunt Marie, thereby diffusing most of the situation with the hold Adalind has over Renard. Now, of course, Nick’s not about to trust either of them.

Which means, with Hank in the hospital, the one friend he has left is Monroe (who fortunately has a spare bedroom now that Nick is done sleeping on the couch). I was so glad they shared so many scenes in this episode, something that has been sorely lacking all season. Monroe baiting the Verrat to lead them into a trap, and he and Nick taking down all four of them – awesome! As much as I want this Juliette situation resolved, I am loving the idea of Nick and Monroe being roommates! More Monroe is always a good thing.

2 thoughts on “Grimm – Season of the Hexenbiest”