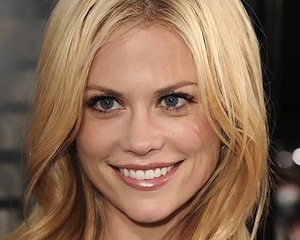 Wondering if we’ve seen the last of Adalind? Fear not (or maybe you should fear), since her portrayer, Claire Coffee, has been promoted to a series regular on Grimm, we’ll be seeing a lot more of her on the show.

Spoilers for the first few season 2 episodes below!

Adalind already got revenge on Nick for destroying her Hexenbiest side, but with the death of her mother (killed by Nick’s mom, but she probably doesn’t know that), she’ll have more reason to come after Nick and his friends. But she also hates Renard, so who knows where her loyalties will eventually lie? I could see her becoming the Grimm version of Spike with a chip in his head or Anya without her powers to the little Scooby gang that has formed on the show. But with Renard’s true nature revealed, it would also be natural for a half-Hexenbiest and a former Hexenbiest to team up. Plus, with her knowledge of potions and such, she’s a natural evil counterpart to Rosalee.