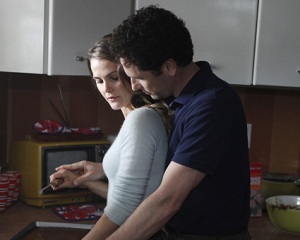 The premise for this show sounds so cool! From TVLine:

The ambitious project, from Joe Weisberg (Falling Skies) and Graham Yost (Justified), is set in the early ’80s and centers on two KGB spies, Phillip (Matthew Rhys) and Elizabeth (Keri Russell), posing as married Americans in suburban DC. Despite their arranged union, the couple’s bond grows more passionate and genuine by the day, but is constantly tested by the escalation of the Cold War. Tensions also heighten upon the arrival of a new neighbor, Stan (Noah Emmerich), an FBI agent working in counter intelligence.

I barely knew what FX was before hearing about this show, and it will be the first show ever that I’ll check out on Fox’s cable network.