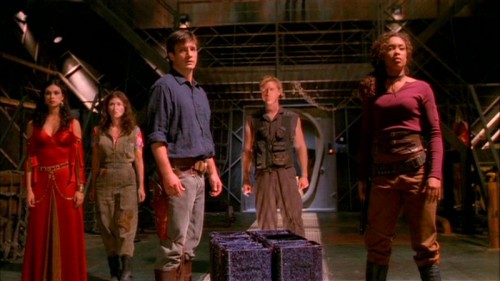 This is the first episode many people saw of Firefly, and it provides a great introduction to the show, perhaps even a better one than the lengthy, morally ambiguous pilot. The narrative opening gives viewers a concise overview of the setting, and only one conversation (Book talking to Mal) sticks out as thinly veiled exposition.

The bar fight encapsulates many of the elements that comprise the show – the Western motif, the hint of Chinese influence, futurist technology, and a lost war. In fact, that scene provides a much clearer emotional picture of the war’s effects on Mal and Zoe than the long war scene in the pilot does.

I absolutely love Jayne in this episode. From declining to join in the brawl (but eventually doing so) to grousing about jumping onto a moving train, to his reactions to Simon doping him – all of it’s priceless.

Niska emerges as a very creepy villain, and you just know that not completing his job is going to going to come back to haunt the crew. And the “two by two, hands of blue” make their first appearance.

Zoë: Sir, is there some information, we might maybe be lacking, as to why there’s an entire fedsquad sitting on this train?
Mal: It doesn’t concern us.
Zoë: It kinda concerns me.
Mal: I mean they’re not protecting the goods. If they were, they wouldn’t be letting people past ’em.
Zoë: You don’t think that changes the situation a bit?
Mal: I surely do. Makes it more fun.
Zoë: Sir, I think you have a problem with your brain being missing.
Mal: Come on. We stick to the plan, we get the goods, we’re back on Serenity before the train even reaches Paradiso, only now we do it under the noses of twenty trained Alliance feds and that makes them look all manner of stupid. Hell, this job, I would pull for free.
Zoë: Then can I have your share?
Mal: No.
Zoë: If you die can I have your share?
Mal: Yes.

Mal comes across as far more humorous than dark in this episode. He also is more clearly a thief with a heart of gold, in line with shows like Leverage. Far more likable that his character in the pilot. In the pilot, other characters make reference to what sort of man Mal is, but it this episode, we get to see the man he is.

One thought on “Firefly – The Train Job”