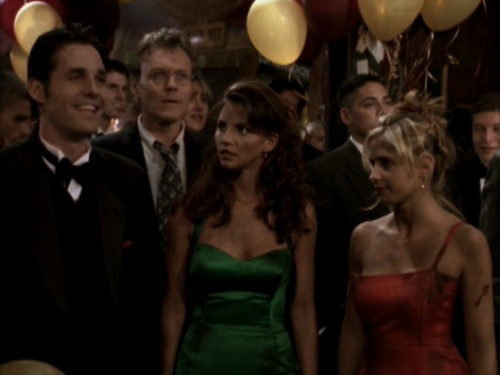 This is one of the more frivolous episodes of season 3, as Buffy decides to battle Cordelia for the title of homecoming queen. Her reasons for doing so are understandable – Scott dumps her, her favorite teacher doesn’t remember her name, and she misses the chance to get even a normal yearbook photo.

But in the midst of the campaigning and bribery, some serious elements emerge that will influence the rest of the season. We get our first glimpse of the Mayor, and the news that this year is important for him. We meet his assistant, and Mr. Trick is brought in. Xander and Willow kiss. Angel hasn’t quite adjusted to being back in this world, and Buffy’s not ready for him to be back in her life.

I love how protective Faith is of Buffy in this episode (especially knowing what’s to come). Her revenge on Scott is hilarious. And Cordelia shows a few signs of the person she’ll become in Angel season one. I love the way she scares Lyle away with just her words.

Poor Giles, trying to make jokes at the dance, but Xander and Willow feel too guilty to even attempt a laugh. And I’d forgotten how much I enjoyed Mr. Trick’s odd sense of humor.

Trick:  Competition. Competition is a beautiful thing. It makes us strive. It… makes us accomplish. Occasionally, it makes us kill. We all have the desire to win. Whether we’re human… vampire …and whatever the hell you are, my brother. You got them spiny-looking head things. I ain’t never seen that before.
Kulak:  I am Kulak, of the Miquot Clan.
Trick:  Isn’t that nice.

His idea to turn his problem (two Slayers where he’s living) into a game-like competition is brilliant, though he really should have gotten more contestants – one Slayer and her ditzy friend got rid of all of them.