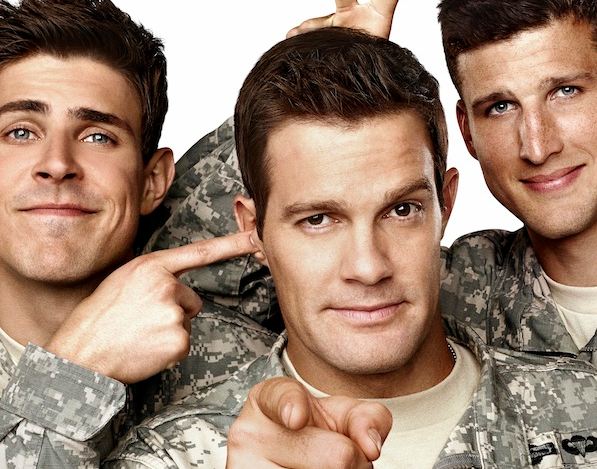 Before I get started blogging about the latest news in TV, I figured I should probably wrap up my thoughts about fall TV, since there was so much I didn’t touch on in the earlier post.

To start, Brooklyn Nine-Nine’s 3rd episode was amazing, and it’s now one of my favorite new TV comedies (about even with The Crazy Ones, despite that show’s significant Mork/Buffy pull). My favorite, however, is the regulated-to-the-Friday-death-slot-before-it-even-had-a-chance Enlisted. Geoff Stults, Chris Lowell, and Parker Young have incredible chemistry as three very different brothers, and I especially love that Parker Young’s character Randy is similar to his character Ryan from Suburgatory, as I’ve missed him on that show!

For returning comedies, How I Met Your Mother’s final season has been a mixed bag of amazing episodes and boring fillers. The rhyming episode was just painful. Community is returning to its old self, but Troy will be very missed (Pierce, not so much). New seasons of The Big Bang Theory, New Girl, The Mindy Project, and The Neighbors have been consistently good, with only a handful of blah episodes for the entire bunch.

Sleepy Hollow’s entire first season was great, and I’m looking forward to the next. I’m enjoying Almost Human and Intelligence with their sci-fi crime bents, but prefer Almost Human (and while both shows aren’t doing well in the ratings, it has a better chance of survival). Once Upon a Time in Wonderland started slow but got better, and I’ll finish the show when the final episodes air, but I won’t mourn the loss. Michael Socha’s great performance may push me to finally watch the end of the UK’s Being Human.

CW’s The Originals has been a great twisty guilty pleasure show, and I’ve actually kept up with it more than The Vampire Diaries. I’m behind on The Tomorrow People (it has potential but feels unpolished), and I only saw a few episodes of Reign, though now that it has been renewed I’m more likely to watch another episode or two before I make a decision on whether to keep watching. Marvel’s Agents of SHIELD has finally found its groove.

Returning dramas have been good if unremarkable – save for the following bits: Once Upon a Time’s Neverland stint was sluggish, but the mid-season finale was blow-your-socks-off amazing. NCIS bid a proper farewell to Ziva, and new team member Ellie isn’t half bad. Person of Interest went for the tears and it still feels like there’s a hole in the team. Arrow remains one of my favorites.