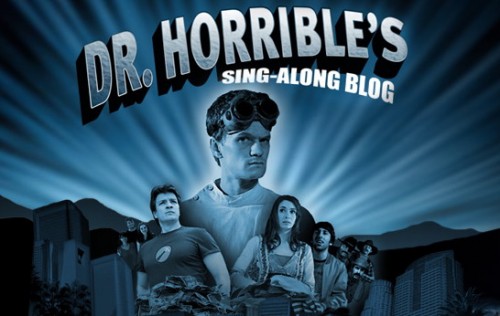 I’ve wanted to post about this for a long time, but I wanted the story (and songs!) to be fresh in my mind before doing so. My friend Anna had never seen it, so showing her was the perfect opportunity to relive the wonderful musical that is Dr. Horrible’s Sing-Along Blog.

Behind the scenes TV Breakroom stuff, ignore this paragraph if you wish: When I create posts for this blog, one of the first things I do after typing in the post title is select categories for the post (so I don’t forget to later). Cross-genre titles like Dr. Horrible always bring a bit of a quandary. Should I stick this under speculative, with the whole superheroes and villains and freeze rays aspect, or should it go under comedy, as it’s clearly hilarious? Or should I create a new category for musicals? I nearly did that, until I considered that the only other show that was likely to go in that category was Glee. Then I got the brilliant idea to create a new category for web series – shows like The Guild which start out online-only until they get popular enough to get on DVD, but don’t ever make to TV. With more and more people watching their shows online, web series are only going to grow and get better. I may not put all made-for-the-internet shows in this category, as I believe many of them will be able to hold their own in more descriptive genre categories, but it will be more for those shows with episodes that are shorter than than typical TV episodes (like The Guild) or shows that are standalone episodes (like Dr. Horrible).

Spoilers below the video for those who haven’t seen it! And if you haven’t seen it, why not? It’s free online in a number of places, and it’s your chance to experience a bit of Emmy-winning internet history. If you’d like a taste of what the show is like, without spoilers, watch the clip from the Emmys below:

The show starts out with a sympathetic villain (the titular Dr. Horrible, played by Neil Patrick Harris) practicing his evil laugh and connecting with his fans via a video blog. He has two goals in life – to be accepted into the Evil League of Evil, and to romance the girl of his dreams, fellow “laundry person” Penny (played by Felicia Day). But hindering him at every turn is his arch-nemesis, Captain Hammer (played by Nathan Fillion).

Dr. Horrible thinks that his two goals complement each other – if he can succeed at being evil, he’ll win her over. He sings about ruling the world with her, and later that, “She may cry, but her tears will dry, when I hand her the keys to a shiny new Australia.” (Bonus points for working the word “shiny” into the episode.) But the song “On the Rise” clearly shows how opposite their worldviews are.

Yet you still think of it as a comedy, where the underdog will, despite himself, win the day and get the girl in the end. But it isn’t. And that’s why the ending is so shocking, yet so right. Only one of Dr. Horrible’s goals can work out. He can choose to redeem himself, and win Penny, or he can be evil enough to join the League, and lose her. He fails to see that Captain Hammer really isn’t his nemesis, but it’s himself. Penny would have realized Hammer’s shortcomings soon enough.

But Dr. Horrible takes the direct path to what he wants – he has to kill someone to get into the League, and he can’t date Penny because she’s dating Captain Hammer. Killing Hammer solves all his problems. Yet in a cruel twist, the person who dies isn’t the man that he hates. It’s the woman that he loves.

And as he stands in shock next to Penny’s broken body, he sings, “Here lies everything, the world I wanted at my feet.” The next lines show that he’s talking about finally making it into the League, but the double meaning in the lyrics is clear. And in that moment, when choice is ripped away, he realizes that he would have chosen her.

Now villainy is all he has left. He changes his white lab coat for one that’s blood-red, and hides his eyes from the world. Yet in his final video blog, he’s dressed as Billy. And completely numb.

Dr. Horrible’s Sing-Along Blog cemented my Joss Whedon fandom. Before watching it, I was a Firefly fan, afterwards, I was willing to try out whatever his creative genius came up with. The show also led me to discover Felicia Day’s The Guild, and Neil Patrick Harris’ How I Met Your Mother. Also of note, Dr. Horrible’s sidekick, Moist, is played by Simon Helburg, Howard on The Big Bang Theory.