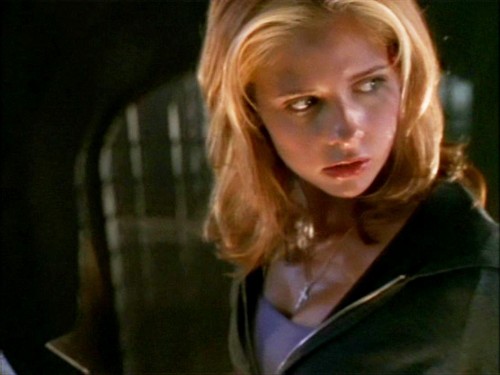 And it’s onto season three! This was only the second time I’ve watched “Anne,” and I’d remembered it being sort of dismal, so I was pleasantly surprised at how fun the episode was despite Buffy hiding out and feeling depressed in Los Angeles.

First off, you get to see Willow, Oz, and Xander’s attempts to fight vampires in Buffy’s absence. Willow tries to copy Buffy’s style, and for a second you catch a glimpse of the uber-confident Willow of later seasons, but then normal Willow returns.

Xander:  Okay, and the, uh, second problem I’m having . . . ‘Come and get it, Big Boy’?
Willow:  W-well, the Slayer always says a pun or-or a witty play on words, and I think it throws the vampires off, and, and it makes them frightened because I’m wisecracking. Okay, I didn’t really have a chance to work on that one, but you try it every time.
Oz:  Uh, if I may suggest: ‘This time it’s personal.’ I mean, there’s a reason why it’s a classic.
Xander:  I’ve always been amazed with how Buffy fought, but in a way, I feel like we took her punning for granted.

This scene parallels the season two opening, only this time Buffy doesn’t come waltzing back in to save the day. She’s waitressing in LA, living in a dingy apartment, and being tormented by dreams about Angel.

Speaking of Angel, this episode begins building some of the framework for his show – the Los Angeles setting, the clip of a girl standing on the street that’s in all the Angel intro credits, and the reappearance of Chantarelle/Lily/Anne who will be on a few episodes of Angel.

One of my favorite parts about starting a new season of a show is the new opening credits. Season three of Buffy brought a slightly updated theme song, and captures many awesome moments.

I love Xander and Cordelia worrying about seeing each other again (especially Cordy, since it’s uncharacteristic of her), and Oz’s many incompletes give credence to him being absent for most of season two. And poor Giles, trying so hard to find Buffy only to have Joyce blame him for her leaving in the first place.

This episode guest stars Carlos Jacott, who is also in the Firefly pilot (which I just watched and will be blogging about soon), and an episode of Angel (as Doyle’s ex-wife’s fiance). I guess he just has a villainous face (though in two of them that’s not even his “real” face).