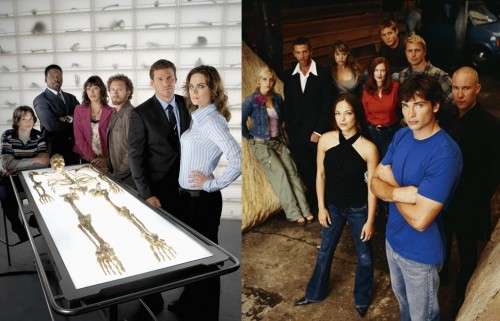 I know two episodes isn’t always enough to find out whether you’ll like a show, but since pilots often differ from typical episodes, I think most shows should be given at least two chances to hook a viewer’s interest (of course, some shows are so terrible they don’t deserve even one full episode, but I’m more talking about a “meh” reaction to a pilot). I know I wish I’d given Buffy more episodes to grow on me, though the fact that I sought out other Joss Whedon shows right afterward hints that it simply was vampires creeping me out.

With my supernaturally-inclined shows all over for good or for the season (The Cape, Merlin, V, No Ordinary Family, and Being Human), and having finished my Buffy/Angel marathon, it seemed like a good time to try out Smallville. So I watched the first two episodes. And yawned.

To be fair, it probably wasn’t a good idea to watch Smallville so soon after falling in love with the Buffyverse. Smallville had big shoes to fill, and true to its name, it didn’t measure up. It didn’t have humor. Or suspense. The dialog was stilted and predictable. Good characters had no flaws and bad ones, no virtues. The country setting didn’t appeal to me either.

Since I’d watched one Superman movie, I was able to pick up on the hints of mythic origin, and thought they were rather well done – until they decided to paint them bolder as if screaming “Get it?” at me. And since I didn’t really care about the elements that would make up Superman’s future (unlike the elements in the Star Wars prequels that made me enjoy them – R2D2, C-3PO, Palpatine’s rise to power, meeting Lars and Beru), I lacked a sense of wonder at their arrival.

I liked the music. Lex and Chloe seemed like they could become interesting characters. But that was it. I may try to make it to a third episode, if only for the fact that James Marsters (aka Spike) will eventually show up on the show. But considering that won’t happen until season 5, and he’s only in there for 14 episodes, I doubt it. Maybe if I’m really, really bored.

To make up for the disappointment of Smallville, I decided to try watching Bones instead. Yes, I already was watching eight other crime dramas, but only one of them focused on the FBI. I’d heard Bones was good several times. It starred David Boreanaz (aka Angel). And Netflix had every past season on watch instantly.

A few minutes into the pilot, I knew I had found a gem. The chemistry and arguments between Brennan and Booth reminded me of Castle and Beckett. The humor and camaraderie of Brennan’s team made me think of NCIS. (And Castle and NCIS just happen to be my two favorite crime dramas.) I watched the second episode just to make sure this show wasn’t too good to be true.

Already, with her brilliance, beauty, and social awkwardness, Dr. Temperance Brennan seems to have so many layers waiting to be uncovered. I love her “I don’t know what that means” line. And she’s a writer!

Seeing David Boreanaz in a different role is nice (since as Angel he tended to live in a perpetual state of angst, with brief periods of dorkiness and pure evil). Many shows tend to paint FBI agents as “by the book,” so it’s refreshing to have the cop being the one who goes by gut instinct.