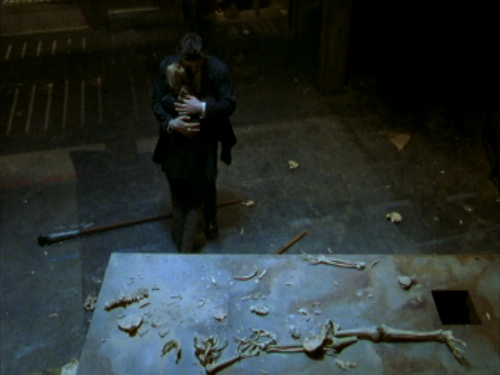 “When She Was Bad”

Season two starts off with an episode of Buffy being very un-Buffy-like, so much so that Cordelia gives her a talking to. The first time I watched it, I really got sick of Buffy’s ‘tude, but watching it now knowing she’ll get over herself, I was surprised how much I loved this episode!

It has the first Xander/Willow sparks, a glimpse of Hank Summers’ real personality to erase lingering hatred from the “Nightmares” episode, and brings Cordelia and Angel further into the group. Even the vampire scenes are less annoying than any other pre-Spike ones. And the dialogue is immensely quotable:

Willow:  That’s what it was! I mean, why else would she be acting like such a b-i-t-c-h?
Giles:  Willow, I think we’re all a little too old to be spelling things out.
Xander:  A bitca?

Snyder:  There’re some things I can just smell. It’s like a sixth sense.
Giles:  No, actually that would be one of the five.

Buffy:  ‘Come to the Bronze before it opens, or we make her a meal.’
Xander:  They’re gonna cook her dinner? (pause) I’ll pretend I didn’t say that.

Buffy:  Because I don’t trust you. You’re a vampire. Oh, I’m sorry, was that an offensive term? Should I say ‘undead American’?

Xander:  Well, we could grind our enemies into talcum powder with a sledgehammer, but, gosh, we did that last night.

Another great episode, with some foreshadowing of villains from seasons 4 and 6 (building a creature from parts and misguided geeks). Love-struck Giles has his first date with Jenny, hampered a bit by Xander and Willow, and of course, a bit of mayhem. Xander saves Cordelia’s life but ignores her gratefulness. Angel’s fighting skills don’t come into play as a lucky shovel strike sends him sprawling (stuff like that happens to Spike a lot in later seasons – I guess the writers don’t want them upstaging Buffy), and the jacket he wears throughout the episode doesn’t really fit his character.

Chris reminds me a bit of Oz (Willow even seems to like him a little), and is one of the show’s first “reluctant villains.” Even though his motivations are painted a bit broadly, it’s nice to have a change from “pure evil just for the fun of it.”

And this episode, like so many others, has great quotes:

Buffy:  You also might wanna avoid words like ‘amenable’ and ‘indecorous’, y’know. Speak English, not whatever they speak in, um…
Giles:  England?

Xander:  Simple deduction. Ms. Calendar is reasonably dollsome, especially for someone in your age bracket. She already knows that you’re a school librarian, so you don’t have to worry about how to break that embarrassing news to her.
Buffy:  And she’s the only woman we’ve actually ever seen speak to you. Add it all up and it all spells ‘duh’.

Cordelia:  Hello! Can we deal with my pain, please?
Giles:  There, there. (pats her shoulder)

Xander:  Y’know, this might go a lot faster if you femmes actually picked up a shovel, too.
Giles:  Here, here.
Buffy:  Sorry, but I’m an old-fashioned gal. I was raised to believe that men dig up the corpses and the women have the babies.

Xander:  And speaking of love…
Willow:  We were talking about the re-animation of dead tissue.
Xander:  Do I deconstruct your segues?

Giles:  I just think it’s rather odd that a nation that prides itself on its virility should feel compelled to strap on forty pounds of protective gear just in order to play rugby.
Jenny:  Is this your normal strategy for a first date? Dissing my country’s national pastime?
Giles:  Did you just say ‘date’?
Jenny:  You noticed that, huh?

Xander:  Well, I guess that makes it official. Everybody’s paired off. Vampires get dates. Hell, even the school librarian sees more action than me. You ever think that the world is a giant game of musical chairs, and the music’s stopped and we’re the only ones who don’t have a chair?
Willow:  All the time.