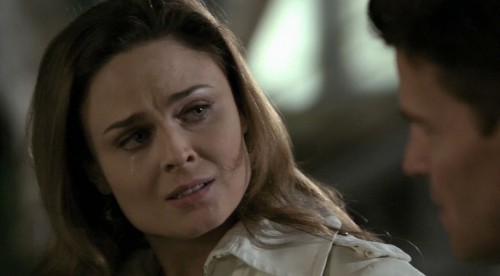 This special 100th episode of Bones provides a fun look back at Booth and Brennan’s first case together, but a sad look forward.

I love how the episode provides a logical reason for telling the story in the first place – Dr. Sweets assuming that the pilot episode’s case was their first, and Booth and Brennan correcting him. Since all the other major characters lived through the story (even Cam, in a different job), he was the only one who needed to hear the full story.

My favorite part of this episode was the origin of many things we accept as a natural part of the Bones universe: Booth wearing crazy ties and socks, Hodgins’ experiments, Angela working for the Jeffersonian, why they have the fancy computer-generated scenarios, Brennan working with bodies that haven’t been dead for centuries, and Booth correcting Brennan’s misuse of colloquialisms.

I didn’t like that the flashback case doesn’t match up with the pilot episode’s description of it. Booth says, “The last case we worked, she provided a description of the murder weapon and the murderer, but I didn’t give her much credence. Because she did it by looking at the victim’s autopsy X-rays.” But I like that this version makes their falling-out more personal. And while Cam’s interaction was minimal enough that Brennan wouldn’t remember her years later, the same can’t be said for Caroline Julian’s.

The ending of the episode is heartbreakingly sad. At first, I couldn’t understand Brennan’s reaction. The final episode of season 4 made it clear she’s in love with Booth. Why on earth would she turn him down, when even her most rational side would conclude they would be happy dating? But her telling Booth she doesn’t have his kind of open heart doesn’t mean she’s not in love with him – it means she’s scared. Scared to risk everything on a relationship that might not work out. What they have now – their working relationship and friendship – means everything to her. That’s why she mentions the FBI not letting them work together, and why there’s vulnerability in her eyes when she asks Booth if they can still work together. The closeness they share as partners is all she will let herself risk. It’s more than she’ll share with anyone else, but she knows it’s not enough for Booth. So she’ll keep loving him as much as she feels she can while they work together, and leave him free to find someone who will love him back in a way she believes she never can (though I’m fairly certain she’s wrong about that – she has grown a lot over the past years, and I believe that will continue until she’s able to love Booth back fully).

Wow, I didn’t intend to go all Dr. Sweets on the ending. But that’s far better than me hating the ending because I didn’t understand Brennan’s motivations.

Have you seen this episode? What do you think of it?