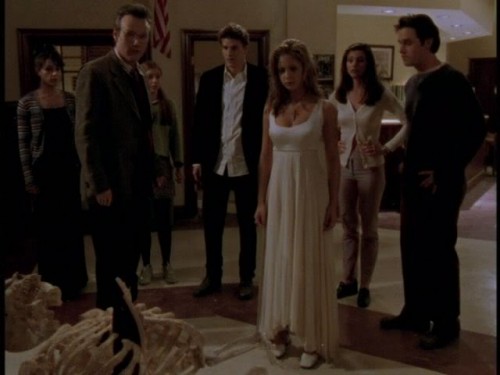 “Out of Mind, Out of Sight”

This episode really sets the stage for season two. Cordelia finally shows a glimpse of humanity, and even saves a teacher’s life, though she’s still far from joining the Scooby gang (which hasn’t even been called that yet).

Cordelia:  Hey! You think I’m never lonely because I’m so cute and popular? I can be surrounded by people and be completely alone. It’s not like any of them really know me. I don’t even know if they like me half the time. People just want to be in a popular zone. Sometimes when I talk, everyone’s so busy agreeing with me, they don’t hear a word I say.
Buffy:  Well, if you feel so alone, then why do you work so hard at being popular?
Cordelia:  Well, it beats being alone all by yourself.

Angel has his first real conversation with Giles, and later rescues him, Willow, and Xander. The rescue might have seemed a bit too convenient, but a) he had a reason for coming to the school, b) in future episodes Angel typically uses sewers and basements to get around during the day, so him being in the basement is logical, and c) vampires have a keen sense of smell, so noticing the gas would have been easy.

There’s also the first hint that the government is aware of things most people in Sunnydale ignore, foreshadowing nicely for the Initiative in season 4.

Giles:  I’ve never actually heard of anyone attacked by a lone baseball bat before.
Xander:  Maybe it’s a vampire bat.

The season one finale is easily one of the best episodes of that year. And it’s not only that we finally get rid of the Master (I’m thinking he’s a big reason why it took me so long to get into the show). He’s easily my least favorite “Big Bad” on Buffy, though I hadn’t remembered he used hypnosis. I wonder why some vampires have this power (Drusilla and Dracula do as well later in the show) and some apparently don’t. It’s interesting that both Buffy and Kendra are killed because of this. Almost feels like the vampires are “cheating” (at least compared to Spike’s slayer kills).

Xander finally confesses his feelings for Buffy by inviting her to the dance, but she turns him down. I love it that Willow’s not willing to be his consolation date, though.

The scene where Buffy finds out that it’s prophesied she’ll be killed by the Master is one of the best in the season. I also like how they did the scene where Willow and Cordelia find the massacre in the A/V room – there’s so much death in this show that random killings are often overlooked or set aside with so the characters can handle the menace. It’s sad that (likely the first time) Cordelia likes a guy enough to put her wants on the back burner he ends up dead. And Willow’s pain over the incident pulls Buffy back into the fight.

I love that Buffy’s willing to punch Giles out to save his life. And I love Xander and Angel teaming up to save Buffy.

Xander:  How can I say this clearly? I don’t like you. At the end of the day, I pretty much think you’re a vampire. But Buffy’s got this big old yen for you. She thinks you’re a real person. And right now I need you to prove her right.
Angel:  You’re in love with her.
Xander:  Aren’t you?

The beast the comes out of the hellmouth is almost comical (reminds me of the creature in the pit from Star Wars: Return of the Jedi, complete with vine-like grabbing things). But that lack in effects is made up for by the totally cool image of Cordelia driving her car through the school. And while the theme music seems a little out of place while Buffy, Angel, and Xander march to the school, I love it when Cordelia bites the vampire trying to get into the library: “See how you like it!”

What are your thoughts on the first season of Buffy the Vampire Slayer?