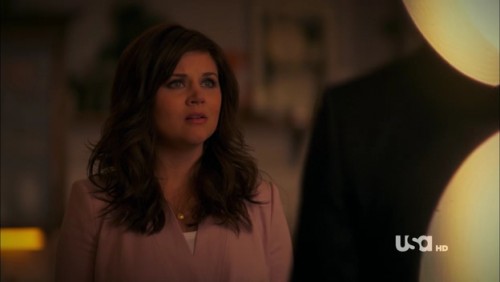 Season three of White Collar opened with two new aspects – a con driving a wedge of mistrust between Peter and Neal, and new opening credits.

The revelation in the first episode that Mozzie was the one who stole the treasure and faked its destruction makes Neal’s dilemma a bit more believable. He can’t simply “do the right thing” and turn everything over to the Feds – he’d be betraying Mozzie. Yet escaping with millions in art will mean cutting all his ties in New York – Peter, the FBI, Elizabeth, June, Sara.

Some close calls and quick decisions in the first few episodes tabled the issue for a while, and I’m glad that it won’t overtake the entire season. The past two episodes have been fun character portraits.

“Dentist of Detroit” dives into Mozzie’s past, including how he got started in the con business, how he got to be so well-read, and where his name comes from (you don’t think someone that paranoid would tell a fellow con artist his real name, let alone the Feds?). Interesting note – Mozzie’s mentor played Gus’s dad on an episode of Psych.

“Veiled Threat” has Peter going undercover to catch a black widow. We got to see a new side of his relationship with Elizabeth, and my heart broke for her when she had to walk away after Peter was nearly hit by a car. This episode had so many fun aspects as well: Neal doing the painting for Peter. Mozzie as Peter’s valet. Peter tangoing like a pro. Neal bring Diana an awesome meal as a thank you. And the end of the episode was so sweet!

Many fans were disappointed in the new opening credits, myself included. They just don’t fit the tone of the show, especially the new music. It’s hard to believe a network that has been spot on with such credit sequences as Psych and Covert Affairs could get this one so wrong (though I imagine that’s more of a decision for showrunners). But after catching wind of fans’ dislike of the new credits (creator Jeff Eastin tweeted: How are you feeling about the new #WhiteCollar opening? Be honest, I can take it…), USA Network is allowing viewers to vote on keeping the new opening sequence or reverting to the old one.

I think this is a huge step for a show and a network to take, moving toward and flowing with the inevitable changes media is taking. Someday soon I think we’ll see the option for fans to vote for which shows get canceled, what pilots get picked up, and which guest stars make an appearance. But in the meantime, cast your vote here (voting starts today!) and be a part of history. And let me know which side you’re on in the comments below.

What do you think will change in TV during the next few years? I’d love to hear your predictions and thoughts!