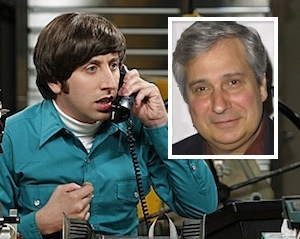 The Big Bang Theory’s newest guest star, Ken Lerner, is best known for playing Buffy the Vampire Slayer’s Principal Flutie in the first season of the show (before he was eaten by hyena- possessed teenagers). On BBT, he’ll be playing a dentist currently dating Howard’s mother (I guess, since Howard’s been in space, she’s found time for a social life.)