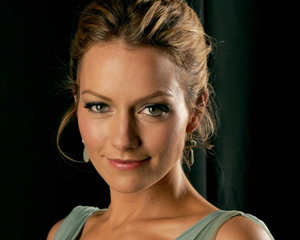 Well, the rumors about Becki Newton’s character (whose arc begins this coming Monday) being a perfect match for Barney on How I Met Your Mother have likely been exaggerated, since she’s filming a pilot for another show (and therefore not likely to be on HIMYM next fall). So I’d say it’s almost certain her character will not be the bride at the wedding where Ted meets the mother. Good news for Barney/Robin shippers!