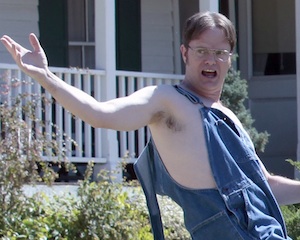 I still feel like this Dwight-centric spin-off of The Office is a bad April Fool’s Day joke (wait, what’s today? Oh, we’re in June). Much as I like Dwight’s character, it really shines in contrast to the “normal” people at The Office, especially Jim.

So who will we be left with at The Office if The Farm’s planted pilot gets the green light for a full-blown show? Michael Scott’s been gone for a year, and while I loved Andy’s turn as manager, Robert California’s head honcho role was terrible. But even as annoying as he was, new character Nellie is even worse, so losing him and gaining her as a full cast member doesn’t improve things. Kelly’s gone as well, and Ryan will only be stopping by occasionally. And now Dwight will either leave the show completely or take a reoccurring role.

Whose love story do we have to root for now? Jim and Pam, and Andy and Erin don’t need any more drama. Who will Jim play pranks on?