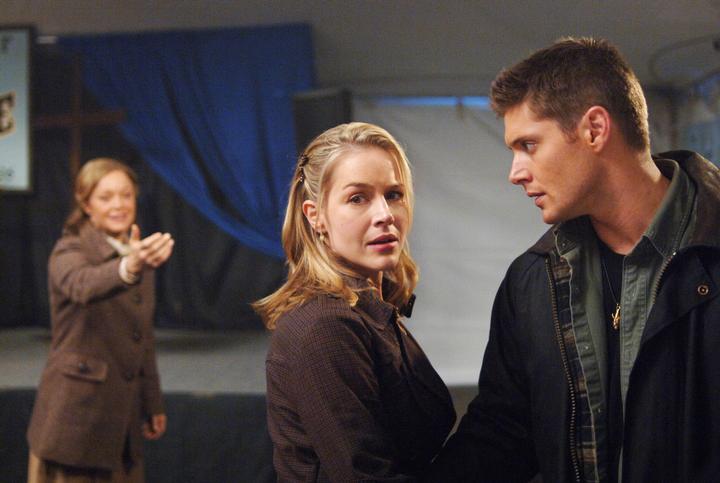 Great episode! It kind of reminded me of early Angel episodes, which I’m sure was helped by the guest star appearance of Julie Benz, who played Darla on both Buffy and Angel.

This episode starts out with the brothers taking out a baddie that needs to be electrocuted. Only problem – when Dean zaps him, they’re both standing in the same puddle of water. The shock causes Dean to have a heart-damaging cardiac arrest, and the doctors only give him weeks to live.

Dean’s actually pretty resigned about the diagnosis (I guess with his choice of occupation, he has to figure something will get him sooner or later), but Sam is determined to find a cure for his brother. He tries to contact their dad (I’m liking the guy less and less – not even coming when your son is dying?) and calls up all the contacts in their dad’s journal. One of them points the boys to a faith healer. Dean is skeptical, but Sam convinces him to go, and Dean is healed by the blind pastor.

But Dean sees a shadowy creepy old man as he is healed, and when he finds out a local man died of a heart attack around the same time as the healing, he begins to question whether the “miracles” are something darker. After matching up other healings to other deaths, Dean and Sam figure out that a Reaper is at work here, possibly bound by the pastor to do his bidding.

They do some investigating and find out it’s the pastor’s wife who is meddling in black arts and choosing victims based on their immorality. Dean’s snooping around puts him on her hit list, but Sam is able to save the day by destroying her talisman, and the Reaper takes the person who has bound him for so long.

What could have been just an episode about hypocritical church people gets a different spin by the presence of Julie Benz’s character, Layla. Dean is initially attracted to her, but is thrown for a loop when he finds out she has an inoperable brain tumor. (She’s there with her mom, so it was easy to assume the mom was the one who needed healing.) Stopping the Reaper means that Layla will die in a few months. I loved her and Dean’s conversation at the end of the episode, where she tells him that if you’re going to have faith, you can’t just have it when the miracles happen, but when they don’t, too. And Dean admits he’s not the praying type, but he’ll pray for her.

The episode differed from the previous creepy episodes, in that it was more of a mystery with few spooky moments. I would have enjoyed a few more twists, but all in all, this was an excellent episode.