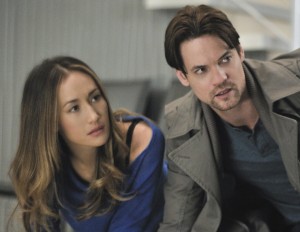 Yes, very spoilery post below, though it’s not that bad if you’re only an episode or two behind in the season (like me) – lots of hints about future episodes, but nothing too concrete. Three huge spoilers at least if you still haven’t finished season one (and if so, shame on you!). I actually find a little encouraging that showrunner Craig Silverstein plans to off characters since he can’t afford them all – getting ready for season 3, perhaps? As for which character I think is about to say goodbye to the show, it’s hard to guess. So many of them have cheated and faked death so far, so that doesn’t offer any sense of security. I just hope it’s not Birkhoff.