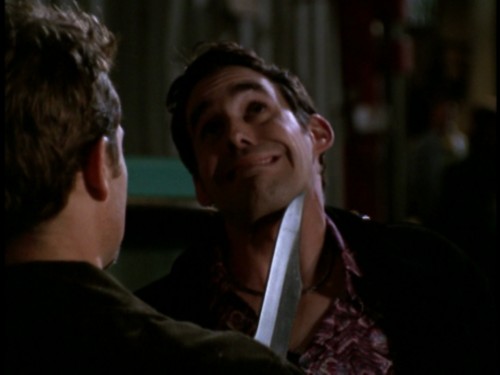 I figured it was about time I got back to my Buffy episode reviews! “The Zeppo” is one of my favorites, so I kept putting it off since I wanted to do a thorough job on the review. And then the fall season started, and I was way too busy juggling new episodes to even think about rewatching old ones, unless I was introducing friends/family to shows.

This episode follows a different format than typical ones. Most TV episodes have several storylines going on at once, with the one having the highest stakes being the focus and getting the most screen time, while one or more minor storylines often feature supporting cast and add humor, character development, and plot details to supplement the main story. With “The Zeppo,” the formula is switched. Xander’s side story of trying to be cool and prove he’s not useless becomes the focus, and Buffy and the rest of the gang stopping a near-apocalypse gets only a handful of scenes.

Buffy:  Xander, one of these days, you’re gonna get yourself hurt.
Faith:  Or killed.
Buffy:  Or both. A-and, you know, with the pain and the death, maybe you shouldn’t be leaping into the fray like that. M-maybe you should be…fray-adjacent.
Xander:  Excuse me? Who, at a crucial moment, distracted the lead demon by allowing her to pummel him about the head?
Faith:  Yeah. That was real manly how you shrieked and all.
Xander:  I think you’ll find that was more of a bellow.
Buffy:  Uh, what do we do with the trio here? Should we burn them?
Willow:  I brought marshmallows.
(Surprised looks.)
Willow:  Occasionally, I’m callous and strange.

In the end, you don’t really know what went on with the Hellmouth opening again. You glimpse a few mid-action scenes (as if you were flipping through channels during commercials), and hear the gang’s comments afterwards. And you get a few funny bits like this one:

Willow:  Where are you going?
Giles:  Um, to try and contact the Spirit Guides. They exist out of time, but have knowledge of the future. I have no idea if they will respond to my efforts, but I have to try. All we know is that the fate of the entire world rests on it. (looks into the doughnut box) Did you eat all the jellies?
Buffy:  Did you want a jelly?
Giles:  I always have a jelly. I’m always the one that says ‘let’s have a jelly in the mix.’
Willow:  We’re sorry. Buffy had three.

But you know exactly what went on with Xander’s evening. I particularly like the scene pictured above because of the weapon’s name. There are other named weapons in the Whedonverse (Mr. Pointy and Jayne’s Vera spring to mind), but this one shares my name:

Xander:  Yeah. Great knife. Although I think, uh, it may technically be a, a sword.
Jack:  She’s called ‘Katie’.
Xander:  You gave it a girl’s name. How very serial killer of you. Listen, I think we should be going.
Jack:  Are you scared? (traces the tip of the blade around Xander’s neck)
Xander:  Would that make you happy?
Jack:  Your woman looking on, you can’t stand up to me? Don’t you feel pathetic?
Xander:  Mostly I feel Katie.
Jack:  You know what the difference between you and me is?
Xander:  Again… Katie’s springing to mind.

Much as I hate zombies, the whole story with Jack’s dead friends is hilarious. When Xander realizes they’re making a bomb, his interrogation technique (and subsequent decapitation) is exactly what I would picture him doing.

I love how in the end, Xander saves his friends by playing chicken with Jack and the bomb, and proving that he’s not afraid. And none of the Scooby Gang finds out that he saved their lives – Xander knows, and that’s enough for him.