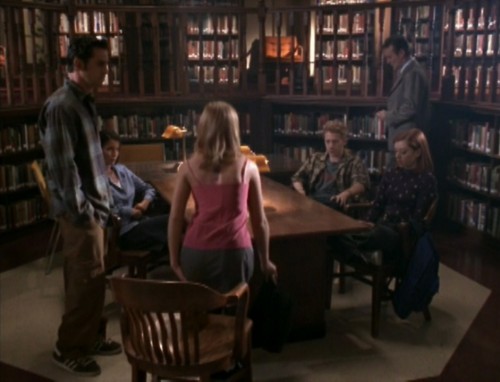 While perhaps not quite as dramatic as other seventh episodes in the show, “Revelations” does bring in a few twists that will have a major impact on the rest of the season.

First up is the gang finding out Angel’s alive. Judging from most of their reactions, it’s probably a good thing Buffy didn’t tell them earlier, while Angel was half-mad or extremely weak. There doesn’t seem to be the clear-cut distinction of Angel with a soul versus Angel without a soul in their minds.

Xander:  What, you just tripped and fell on his lips?
Buffy:  It was wrong, okay? I know that, and I know that it can’t happen again. But you guys have to believe me. I would never put you in any danger. If I thought for a second that Angel was going to hurt anyone…
Xander:  …you would stop him. Like you did last time with Ms. Calendar.
Willow:  Buffy, I feel that when it comes to Angel, you can’t see straight. And that’s why we’re, we’re all gonna help you face this.
Buffy:  But he’s better now. I swear. Look, you guys, he’s the one that found the Glove of Myhnegon. H-he’s keeping it safe for us in the mansion.
Xander:  Right! Great plan. Leave tons of firepower with the Scary Guy, and leave us to clean up the mess.
Buffy:  You would just love an excuse to hurt him, wouldn’t you?
Xander:  I don’t need an excuse. I think lots of dead people actually constitutes a reason.
Buffy:  Right. This is all nobility. This has nothing to do with jealousy.
Cordelia:  Hello? Miss Not-Over-Yourself-Yet?
Buffy:  Don’t you start with me.

Second is Faith’s reaction to the events in this episode. Her new Watcher turns out to be a fraud, and Buffy fights Faith to protect Angel. So, not only is her faith in people in general wounded, a wedge is driven into her friendship with Buffy that will lead to betrayal.

Having just read the first issue of the Angel and Faith comic, it was interesting to watch their first meeting – a fight, of course. It’s short-lived, and Buffy has to step in to prevent Angel from getting staked, so it’s probable that Angel is still weak from his hundreds of years in a hell dimension. Though he seemed to go okay fighting Pete in episode four.

I don’t know anything about Tai Chi, but Angel looks really sissy doing it. Though it sort of fits his “big, fluffy puppy with bad teeth” persona. (Yes, I am totally looking forward to Spike’s return in the next episode!) I wonder who’s the best fighter out of the four – the two Slayers, and the vampires with souls. Buffy’s beat both Angel and Faith. Spike’s beat Angel (in Angel season 5). Spike and Buffy’s fights usually get interrupted. Faith lost her fight with Lagos in this episode, but Buffy beat him fairly easily.

Buffy:  Interesting lady. Can we kill her?
Giles:  I think the council might frown upon that.

Xander and Willow are still hiding their relationship from everyone, though Willow almost confesses it to Buffy. This makes her more sympathetic to Buffy’s secret.

What secrets (in TV shows or otherwise) should be kept?