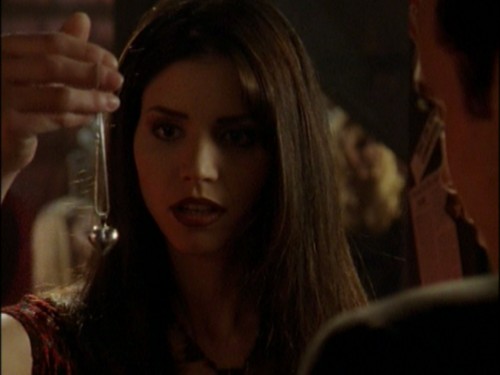 I love how this show has both humorous and serious episodes, with many being a macabre mix of both elements (“Tabula Rasa” comes to mind as one). This episode definitely falls on the comedy side as Xander faces the consequences of a love spell gone wrong.

Xander and Cordelia’s relationship is finally out in the open, and since it’s causing her popularity to wane, Cordelia decides to break up with him, right after he gives her a sweet little heart-shaped necklace for Valentine’s Day. I think the moment I finally began to like Cordelia’s character was when Xander asked for the necklace back and we find out Cordelia’s wearing it, hidden under her shirt. The look on her face when she takes it off is heartbreaking.

Amy’s back to cast the spell gone awry, and while most of the special effects seem cheesy, it’s interesting to note that her eyes go black and even red, consistent with what we’ll see in season 6. But I wonder why no one even thought of going to Amy for help with the gypsy curse later on this season? Of course, her error in this episode might give them cause to discard the idea.

In a recent roundtable discussion, Sarah Michelle Gellar mentioned this episode, saying something along the lines of, “I was getting burned out, so they turned me into a rat for an episode.” (Tried to find the exact quote but couldn’t.) And I love it that Oz punched Xander, and his fumbling statement afterwards:

Oz:  I was on the phone all night, listening to Willow cry about you. Now, I don’t know exactly what happened, but I was left with a very strong urge to…hit you.

I also found it a bit odd that Giles was so hard on Xander in this episode. In fact, now that I think about it, I don’t remember Giles and Xander ever connecting very well. Which is a shame, since considering what Xander’s dad was like he could have really used a good father figure.

My favorite “discovery” on rewatching the episode was this little gem:

Angelus:  Dear Buffy. I’m still trying to decide the best way to send my regards.
Spike:  Why don’t you rip her lungs out? It might make an impression.
Angelus:  Lacks… poetry.
Spike:  It doesn’t have to. What rhymes with lungs?

Nearly three entire seasons after this, in our first introduction to Spike as a human, he’s an awkward young poet trying to find a word that rhymes. Side note: I didn’t realize until I read the new Spike comic (thanks to Erin on Twitter since I don’t live near a comic store to get the exclusive code) that what William chose to rhyme with effulgent was “a bulge in it,” not ebulgent as I’ve seen it written many times. And it’s not just in relation to the poem, so BtVS may have created a new word! Not that they haven’t reformed many other words over the years.

Since the gift of a necklace makes a stark parallel between the relationship of Spike and Dru, and Xander and Cordelia (or Cora, which is a name only Xander calls her), I think it’s worth exploring a few others. Both Dru and Cordelia sometimes treat their guys as mere boys, with disdain and condescension. Both break up with them because of perceived love for someone else. Both will or have been involved with Angel/Angelus. Xander used to be in love with Buffy, Spike will be in love with Buffy. Any other parallels I’m missing?

One thought on “Buffy the Vampire Slayer – Bewitched, Bothered and Bewildered”