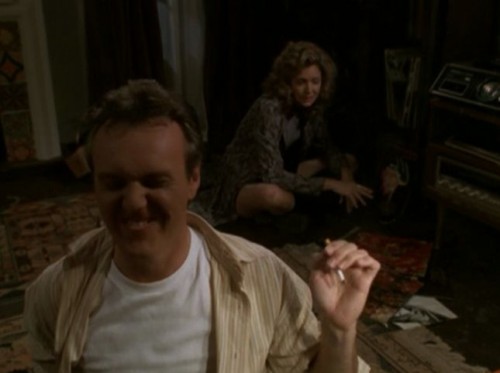 This is one of the most hilarious episodes of the entire show. Watching Joyce, Principal Snyder, and most of all Giles act like crazed teenagers is amazing fun. And of course, the mind behind all this mayhem in the master of chaos himself, Ethan Rayne.

But Ethan seems far less evil in this episode than he has in past ones. It is, however, just a contract job for him – the Mayor had Mr. Trick hire someone to cause a distraction so he could pay tribute to a demon. The sewer demon is probably the weakest part of this episode – just a huge snake-head that looked like it could have been made of paper mâché.

Caught between her mother’s and Giles’ demands on her time, Buffy resorts to lying so she can sneak off to see Angel, who’s still weak. That’s the only scene he gets in the episode, and Faith doesn’t even make an appearance, with no explanation given for her whereabouts.

But who cares, with the pure candy-like fun of this episode? It was especially refreshing coming off rereading some of the more depressing season 8 comics (plus Spike: Volume 2, which arrived yesterday and finally explained where and how he got his bug ship). I’d also been trying to place this quote:

I knew it was somewhere in the show, since it showed up again in the Buffy/Fray crossover comic, but since I’d only seen “Band Candy” once before I didn’t remember who’d said it and in which episode. But this episode has tons of fun quotes:

Xander:  I don’t get this. The candy’s supposed to make you feel all immature and stuff, but I’ve had a ton, and I don’t feel any dif…  Never mind.

Buffy:  So, Ethan, what are we playing? We’re pretty much in a talk-or-bleed situation. Your call.
Giles:  Hit him.
Ethan:  I-I’d just like to point out that this wasn’t my idea.
Buffy:  Meaning…?
Ethan:  I’m subcontracting. It’s Trick you want. I’m just helping him collect a tribute… for a demon.
Giles:  He’s lying. Hit him!
Buffy:  I don’t think he is, and shut up.
Giles:  You’re *my* Slayer, go knock his teeth down his thr…
Buffy:  Giles!
Buffy:  What demon?
Ethan:  I don’t remember.
(Buffy punches him.)
Giles:  Yes!

There was talk of a spin-off show based on Giles’ early years which never materialized. But this episode gives a little glimpse of just how much fun that would have been.