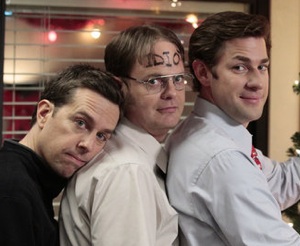 As much as The Office has become a mix of heartwarming embarrassment (like the 10 best and worst minutes of extended family holidays rolled into a TV show each week), I’m not sure it can thrive with losing many more of its main cast members. Survive, yes, since NBC’s ratings are dismal and this is one show that has stood the test of time on the network. I’m not surprised they’re trying to keep the show in any form possible, given that it consistently is their highest-rated Thursday show. I think the show could do okay without Pam (with two kids at home, her staying home with them and only making an appearance a few times a year would work), but it has to keep Jim, and either Dwight or Andy, to feel like the same show.