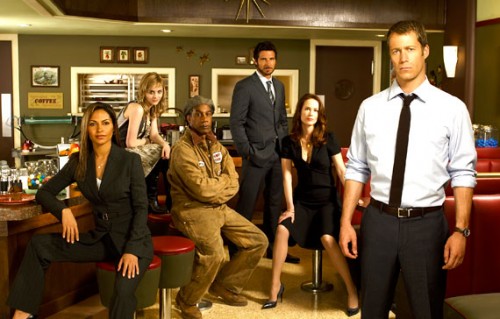 I’d heard Eureka mentioned a few times in passing as a good show, but it wasn’t until I heard that Felicia Day (of The Guild, Dr. Horrible’s Sing-Along Blog, and Dollhouse fame) was appearing in several episodes that I decided to investigate further. Netflix had the first three seasons on instant play, so I mentally put it on my to-watch list.

When I started watching Warehouse 13, I heard that it had a number of crossovers with Eureka, so I began watching Eureka so I could have the crossovers in their correct places.

The premise of the show is a small town full of geniuses working in a secret government facility (and on their own projects at home in their spare time). A U.S. Marshall stumbles upon the town on the way back from retrieving his runaway teenage daughter, and helps out with an investigation. He’s rewarded with a “promotion” (which felt similar to the Warehouse 13 agents’ “promotion”) to the position of Eureka’s sheriff.

The double-length pilot episode was a little slow, but it showed the potential the series had. The following two episodes didn’t wow me, though. I think one of the reasons I’m not liking the show very much is that I generally dislike small-town shows. I prefer shows with close-knit teams or groups of friends than with gaggles of eccentric neighbors. Even the one small-town show I did enjoy, Gilmore Girls, I liked for the main group of characters and just ignored the others.

Another thing I dislike is the clichéd workaholic dad/rebellious teen dynamic. I’m guessing the show was trying to make them as everyday as possible to contrast with the rest of the town, but they just make me yawn.

And for a town that caters to the geeky side of the population, where are the twenty-somethings? We have gifted children and preteens, a main teenager, and plenty of adults in their thirties and forties, most of them parents. The deputy is probably in her twenties, but she doesn’t have much of a story of her own. I would expect there to be a lot more characters like the director’s assistant (loved his Sarah Michelle Gellar comment!), and I’m hoping further episodes of the show will rectify this.

As of three episodes in, this just seems like a quirky family drama, with the intelligence of the characters dumbed down and the science mashed into clichés. And it doesn’t help that I’m not familiar with any of the main actors. But I’ll give this a few more episodes (mostly for Warehouse 13 and Felicia Day’s sake) before I decide whether I’ll keep watching. 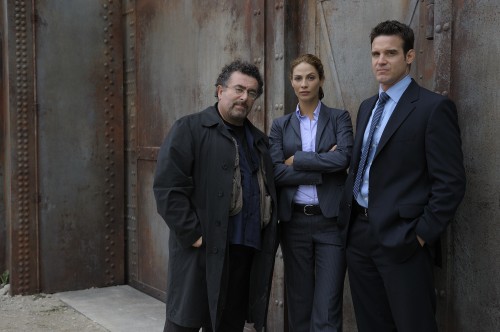