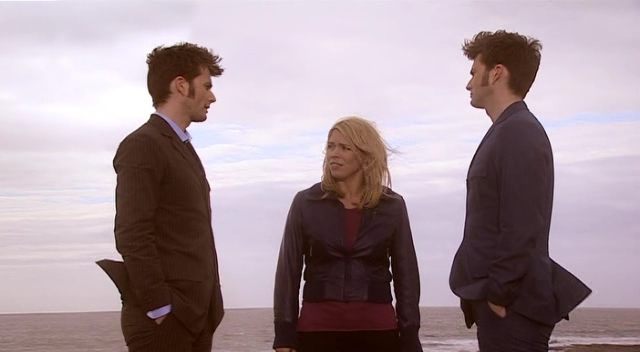 Just read the following article: The Actual Plot Holes in Doctor Who | Doctor Who TV. While I like that it makes the point that there are fewer plot holes in the modern version than people think, I disagree with the article about many of these being actual plot holes.

1. An out-of-place comment in the Russian translation? I’m guessing the author added this just to make it an even 10. Ludicrous that this is even included.

2. The Angels Take Manhattan end. A lot of people have a problem with this one. I explain it away in my head with the Doctor feeling he can’t mess with Amy and Rory’s timelines anymore. The gravestone indicates they should grow old and die in NYC. If he tries to mess with that, even by visiting (because how can he be sure he/they won’t try to travel together again?), it could have disastrous results.

3. Telepathic circuits. I’m not sure where it is established that only people who have been inside the TARDIS get the automatic translations. But the TARDIS is smart, and is shown in the future as extending force fields and air tunnels outside her doors. I’m sure she wouldn’t mind extending the translation ability temporarily to a few of the Doctor’s allies in a pinch.

4. Meta-Crisis Doctor. Having the same memories as the Doctor does not equal having the Doctor’s exact personality (see every single other regeneration). While Meta-Crisis is similar to Ten, the different physiology means that other things can be different as well. The same battle-born PTSD symptoms that Nine had, for example.

5. People have mentioned in the comments that whistling and snapping can be done with gloves on. Even if it couldn’t, this is far more a continuity error than a plot hole.

6. Zombie-like patients running. I see this as more of a dramatic timing thing than an actual plot hole. Some could be more sick than others, they could have grabbed a shot of adrenaline somewhere – there could be a dozen reasons for this. It’s very unimportant to the storyline, and I’m glad they didn’t waste valuable screen time explaining.

7. The Doctor’s age. This is quite easily explained with the Earth vs. Gallifreyan years theory. It’s also hard to calculate the age of a time-traveler at the best of time, let alone when years have different lengths depending on where you are in space.

8. Blink – angels moving at different speeds. Another dramatic timing issue. Who knows if weeping angels all move at the same speed? Further episodes show that they can decay and move more slowly at times.

9. Father’s Day. This is a straight up date error made by the writers, not a plot hole. Rose being missing for a whole year meant she was 19 in 2006 as well as 2005, which likely led to the error.

10. The reality bomb went off in a parallel universe. This is the one plot hole in the entire article which I feel had some merit (I might also include the Amy/Rory one). The easiest way to explain away this one is that Davros is mistaken. We know the reality bomb can effect other parallel universes, but there is nothing beyond Davros’s boast to indicate it could affect all universes. Maybe it does wipe out a dozen, a hundred, or even a million parallel universes. All we know for sure is that it doesn’t go off in our world, and Pete’s world still exists.

What do you think? Do these explanations make sense? Are there any other plot holes you see in modern Doctor Who that this article failed to mention?