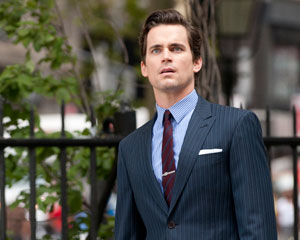 Fun interview with White Collar’s Matt Bomer! He talks about his upcoming movie, guest-starring on Glee (yes, I just played his rendition of Gotye’s “Somebody That I Used to Know” for a friend this evening!), and how long he plans to stay on White Collar. There’s some discussion on more serious topics, including a bias against USA Network shows in the Emmys. But there are also some lighthearted yet insightful questions. For example, this:

Q: Neal Caffrey has to be one of the funnest characters to play.

A: He is. It’s so rare, especially as a younger actor, to find a role where it’s not just one-dimensional and it’s not just a stock leading man. He is smart, intelligent, slick. He has grace under fire. He’s excellent under pressure. He’s on point. He’s firing on all cylinders. But at the same time, he’s really a 4-year-old. He has terrible impulse control. He makes really irrational decisions, especially when it comes to anything romantically-inclined. He is a hopeless romantic to a fault. … It’s a real dream of a role to get to play. More and more, as I play the role over the years, I come to find so many things in my life that I thought were futile or silly at the time, that I may have studied or read about or practiced, led up to this opportunity for me.