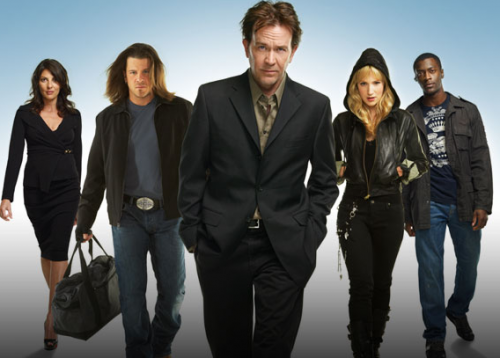 This show arrived at the perfect time. I was looking for something new to watch in December 2008, and most shows were on hiatus. While other networks filled the month with repeats and Christmas specials, TNT made the bold move of debuting Leverage.

The pilot, “The Nigerian Job,” sets up the premise for the show (spoilers for the episode follow). Nathan Ford, a former insurance investigator whose life is in shambles, is hired to oversee three crooks while they retrieve stolen property. Alec Hardison (a gifted hacker), Eliot Spencer (an expert fighter), and Parker (a master thief) have one MO – they always work alone. But since the money’s good, they agree to do this one job. Nate is able to combine their skills and keep them on track to complete the mission.

When the man who hired them double-crosses them, they decide to work together and take him down. To do so, they’ll need a fresh face, so Nate brings in Sophie Devereaux, a grifter he pursued as an investigator for years. They manage to take down the bad guy, and even though the payoff is huge none of them want to retire. They work exceptionally well as a team, so the four crooks ask Nate to lead them.

The rest is history.

What really makes this show work is the chemistry between the team members. Despite all their differences, they work so well together that I was rooting for them to stay together from the start. The show doesn’t sugarcoat the rough patches as the criminals begin to focus on helping people instead the money and Nate grows more comfortable with coloring outside the lines. All of them are dysfunctional in some way (except possibly for Hardison, who seems to be the most normal of the bunch) and they all have secrets. They bicker and fight but always come through for each other.

The only main cast member I was familiar with was Christian Kane (Eliot), who played Lindsey McDonald on Angel (I’d watched the first season that fall), but I don’t remember that as being something that pushed me toward watching Leverage. I read something online about it, thought it sounded intriguing, and watched the pilot. From then on, I was hooked. I even bought the first season through Amazon Video on Demand so I could share the show with my family.

If you like con artist/caper movies like Ocean’s 11 and The Italian Job, you’ll love this show. While it’s a little more altruistic than, say, Burn Notice, the sentimental moments don’t overpower the smart dialogue and fun cons.

What is one of your favorite cons from this show (or another caper show/movie)?